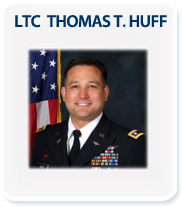 During his long and distinguished Army Career, LTC Huff held many critical positions.   At his last assignment in 2014, LTC Huff’s served as the Aviation Rockets and Small Guided Munitions (ARSGM) Product Manager at Redstone Arsenal, Alabama.  Prior to that assignment,  LTC Huff deployed to Kabul, Afghanistan and served 10 months as the USFOR-A Acquisition Advisor.  LTC Huff  served as the Assistant Product Manager for the MH-60 Special Operations Black Hawk Helicopters Product Management Office Fort Eustis, Virginia for three years. In 2004, LTC Huff was stationed in Huntsville, Alabama, where he served for three years in the Utility Helicopters Project Office, as an Assistant Project Manager for Training and Simulation.  Prior to these assignments, LTC Huff held assignments in Ansbach, Germany and was deployed to Bosnia-Herzegovina.

LTC Huff received his Master of Science degree in Materiel Acquisition Management from the Florida Institute of Technology at Fort Lee, Followed by CGSC-ILE at Fort Belvoir, Virginia.